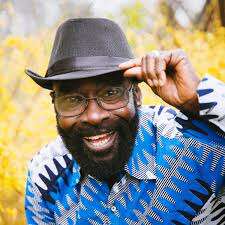 Born in the Ashanti Region of Ghana into a music family, Nana Kwabena Amo Mensah’s chances of becoming a musician were high. His father was a music theory instructor and his mother a bandleader.

Pat Thomas as known in entertainment circles was born on August 14, 1946. Pat Thomas is a well-known Ghanaian singer and songwriter best known for his work with Ebo Taylor’s highlife band and Marijata and the Three Beans in the 1970s.

Pat Thomas released over a dozen solo albums, including Stay There (1976), Asawa Do (1978), and Hitsville Revisited with Taylor and Uhuru-Yenzu, offering a distinct take on Highlife and Afro-pop.

He recorded his first album ‘false lover’ in 1974 with the “Sweet Beans” band he formed.
“The Golden Voice of Africa” as he was called introduced another band, Marijata, and recorded “Pat Thomas Introduces Marijata” his second album in 1976. Pat Thomas relocated to Berlin and later settled in Canada after the 1979 coup in Ghana by the Armed Forces Revolutionary Council (AFRC) led by Jerry John Rawlings.

Pat Thomas has been a great father to his daughter Nana Yaa who has grown to become an exceptional vocalist and great husband to his lovely wife Lola Everette. The “Sweeter Than Honey” composer, is known to be an exceptional family man

West Hills Mall Review of the Month with Hosi

West Hills Mall Review of the Month with Hosi