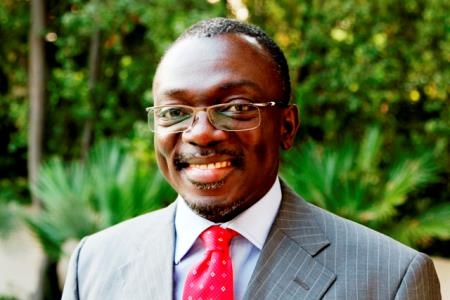 Professor Douglas Boateng honoured with a Lifetime Achiever Award at CEO Global’s prestigious Titans Building Nations Awards Ceremony
Professor Douglas Boateng, Africa’s first Professor Extraordinaire in Supply and Value Chain Management, was honoured with a Lifetime Achiever Award at CEO Global’s recent Titans – Building Nations Awards, held in Midrand on the 8th of July.
At the first of several events to take place across the continent, Prof Boateng was recognised for his extraordinary contribution to regional, national and continental socio-economic development in Africa. In particular, the award noted his commitment to a promotion of regional and continental collaboration for long-term socio-economic success.
Reacting to the award he said: “To be honoured by one of the regions’ premier and most respected awarding bodies, CEO’s Titans Building Nations, for work done in the area of industrial engineering, supply chain management and its link to emerging world development is certainly heart-warming.”
Similar ceremonies are set to take place in Zambia, Mauritius, Kenya, and Ghana later in the year. These events bring attention to the achievements of leading men across the continent who have not only played a pivotal role in advancing Africa’s economic development and progress, but have also impacted directly on the people and communities connected to their respective regions.
Speaking in relation to the aim of the awards, CEO Global’s chief executive officer Annelize Wepener said: “While poverty and strife affect many African countries, CEO Global believes that there are Titans who are building nations with the hope of making Africa one. They are African men who are making sure Africa achieves and utilises its “Power of One.”
Supporting this concept of the ‘power of one,’ Boateng noted: “Collectively more can be done. We need to think of ourselves as ‘one big family,’ with a common shared vision and strategic goal, a common ability to economically develop, and most importantly, a common willingness to co-operate rather than compete with each other. When we think about ourselves in those terms, we can see past our national borders and not be blind to the opportunities around us. It will also enable us to be more appreciative of what we collectively have as people and as a continent.” Such mental emancipation he argued “will help to accelerate all-inclusive long-term industrialisation and socio-economic development on the continent.”
Commenting on the achievements of Boateng and other category winners, Wepener insisted:  “To say that I am awed by these men’s efforts will be an understatement because it is worthy to note that each year, nations across Africa produce an entirely new breed of business leaders; all with the sole intention of spurring the African continent into the future. What makes the crop of men celebrated here even more exciting is the fact that they are a true representation of our beautiful continent, as diverse and unique as our beautiful Africa.”
For the past 16 years the annual Titans Building Nations Awards have been recognising men in various sectors who are committed to the development and prosperity of Africa. This year over 4900 nominations were received. Winners of this prestigious award undergo vigorous judging processes. Finalists who are chosen via independent judging panels, are then interviewed via Skype before winners are decided.
To date Prof Boateng has been at the forefront of various vertical-specific industrial developmental initiatives, and is currently an independent distinguished extraordinary chair in operations and supply chain management for the Institute of Operations Management (IOM) Africa, the chairman of the Chartered Institute of Purchasing and Supply’s (CIPS) Africa Strategic Advisory Board (CIPS is the world’s largest procurement and supply chain related professional body), a Postgraduate and Doctoral supervisor for supply and value chain management at SBL-UNISA, the president of the Institute of Operations Management (IOM) Africa, the international chartered director of IOD (UK), and an adjunct academic and elected fellow of at least eight global professional organisations including IOD, CIPS, CILT, SOE, iPlantE, IC, CMI, and IODSA.
In addition to this, his extensive global influence has extended into the areas of supply chain strategy (international and local), operations, engineering and management, procurement, logistics strategy, e-commerce, TQM, BPO, international business development, corporate governance and director development, and business strategy.
This award is the third lifetime achiever award to be bestowed upon Prof Boateng. He was awarded the CIPS South Africa Lifetime Achiever Award in 2013, and was presented with a Lifetime Platinum Achiever award by CIPS Ghana and the Association of Ghana Industries in January this year.
“It is deeply gratifying to be bestowed with a third independent lifetime achiever award from another distinguished group of independent global compatriots. It means that the world is increasingly taken note of one’s measurable contribution to individuals, business and society alike,” Boateng said.
Previous lifetime achiever winners of the Titans Building Nations Awards include: Dr Suresh Parbhoo Kana, Margaret Hirsch, Dr Jennifer Riria, Prof Karen Sliwa-Hahnle Dr Richard Maponya, and Moses Kgosana.
“I would like to dedicate the award to all those who courageously and selflessly try to make a real and sustainable difference to others within and beyond their communities,” he said.