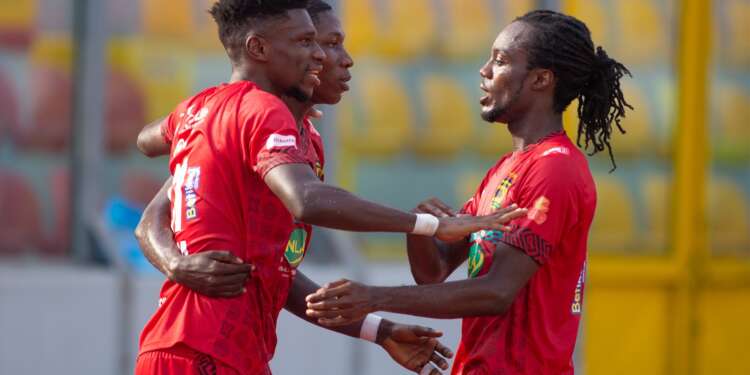 The Cameroonian striker who went two games without a goal increased his season tally to 13 after the brace as the League leaders opened a 10 point gap at the top of the Ghana Premier League table.

The match travelled for 70 minutes before Asante Kotoko got the opener as Dreams FC put up a gallant display to shut the door – making life difficult Richmond Lamptey and Franck Mbella. Coach Prosper Narteh Ogum introduced Mudasiru Salifu in place of Dickson Afoakwa to take control of the midfield.

The win keeps Asante Kotoko at the top of the table with 40 points – 10 points richer than second placed Bechem United and 14 points ahead of rivals Accra Hearts of Oak.

In Obuasi – AshantiGold slipped to a 4-1 defeat to Eleven Wonders at the Len Clay stadium. Tetteh Nortey scored the opener in the 32nd minute but the Miners fetched the equalizer inside 58 minutes. Eleven Wonders restored their lead through Osman Zackaria before Andrews Kuma added the third goal in the 79th minute. With a few seconds to end the game Laar Ibrahim capped the 4-1 drubbing in the stoppage time.

Bright Adjei scored two first half goals as Aduana FC beat Karela United 2-0 at the Nana Agyemang Badu I Park at Dormaa. The former Tema Youth man fired the two time Champions into the led in the 5th minute before completing his brace in in the 20th minute to extend his goal tally to 11 after 18 matches.

In Berekum – Chelsea pip Bibiani Gold Stars 1-0 at the Golden City Park to extend their unbeaten streak to 8 games. Osei Owusu scored the only goal of the match in the 39th minute as the former Champions cruised to another vital home win.

Bottom placed Elmina Sharks failed to make their home advantage count as they played a 1-1 draw against Accra Lions at the Nduom stadium on Sunday. The two goals were produced in the final stages of the game as Osman Kassim scored in the 86th minute to cancel Ishmael Antwi’s 84th minute strike.

High flying Bechem United fell to a 94th minute penalty at the Akoon Park in Tarkwa where Medeama SC won 1-0 against the Hunters. Vincent Atinga netted late to deny the Bechem lads a crucial away point.

#SportsOnY: FIFA orders Russia not to play under flag

#SportsOnY: FIFA orders Russia not to play under flag