The state was responsible for my accident – Stonebwoy 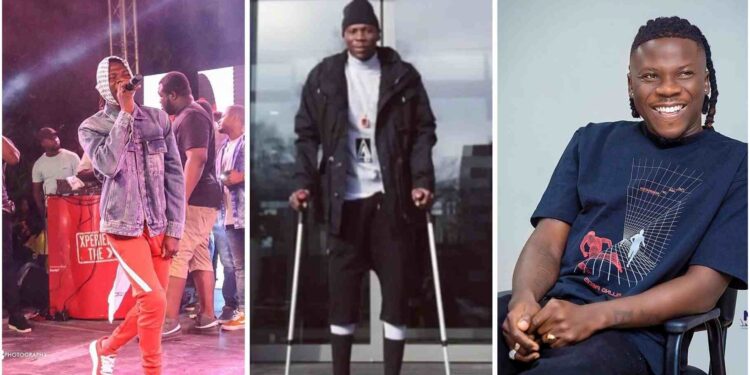 Chief Executive Officer (CEO) of Burniton Music Group, Stonebwoy says the accident that crippled him in one of his legs was caused by a car of a state institution.

According to him, the accident happened at age 13 when he was travelling back from Accra to Ashaiman after a visit to his uncle with his father and sisters.

“I clearly remember my mother had prepared waakye and I was planning to eat it after a football match we had planned but sadly, I never got to eat it. A police van caused the accident on our way back from Accra. My accident was caused by the state and that was the last time I was whole, “he told Rev Erskine on Y107.9FM’s Y Leaderboard Series.

He indicated that it was tough recovering from the accident but sadly, “the state did nothing to support me.”

Stonebwoy who had won a visa lottery and was preparing to travel to the States had to lie on his back for 2 months. “I was the youngest and smallest at the accident ward at Korle Bu. I faced a tough time at the hospital and my mother had to sleep on the floor of Korle Bu for 6 months.”

The multiple award-winning artiste described that phase of his life as tough and had to miss his Basic Education Certificate Examination (BECE). “My mother was doing her best to make sure I was alright and my siblings were also supportive. It wasn’t easy for me as a young boy who was super active and now, I had to accept the reality that I couldn’t run anymore and I suffered a lot of ridicule from society.”

The ‘Putuu’ hitmaker got metal plates fixed inside his knee and “it was not easy for me as I had to hustle through all that as well.”

Not letting the accident prevent him from pursuing an education, he sat for his BECE a year after the accident, passed with flying colours and earned himself admission to Methodist Day Secondary School.

Abu Jinapor thanks Ghanaians for a successful ‘Green Ghana Day’