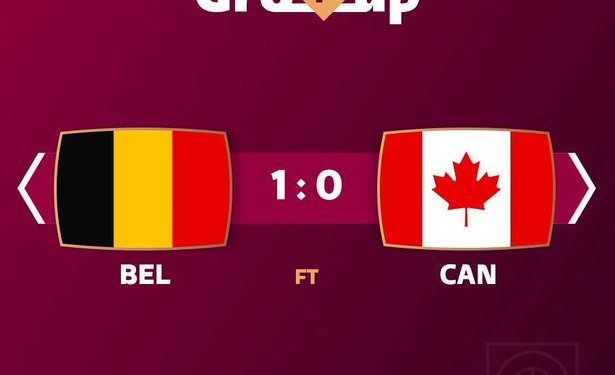 In their first World Cup game, Canada put up a tremendous performance, pushing Belgium all the way. Belgium eventually prevailed in a difficult contest.

Canada was inefficient in front of goal during their Group F match, especially after Alphonso Davies had a first-half penalty saved by Belgium goalkeeper Thibaut Courtois.

Alistair Johnston required a strong save from Courtois as well, but on the verge of halftime, Michy Batshuayi gathered a long ball from Toby Alderweireld and beat Milan Borjan with a left-footed finish.

Jonathan David failed to convert a glorious head-on opportunity to tie the score for Canada, while Courtois also stopped Cyle Larin shot before the break. In the first half, Canada’s two presentable penalty appeals were turned down, leaving them feeling unjustly treated.

Even though Canada’s performance in the second half made a joke of Belgium’s rating as the second best team in the world, Roberto Martinez’s team managed to secure the victory.

Belgium didn’t suffer the same fate as Argentina and Germany by falling prey to a World Cup upset, thanks in large part to Canada’s awful finishing.

Martinez has presided over Belgium’s so-called “Golden Generation,” but this ageing team may have passed their prime based on this performance.

Although they still have a world-class goalkeeper in Courtois and a star player in Kevin de Bruyne, Belgium appeared worn out, jaded, and incredibly exposed to Canada’s aggressive offensive approach.