A total of The 100 senior high schools drawn from the North Eastern, Northern, Savannah, Upper East, Upper West, Oti, Bono, Bono East and Ahafo regions have been presented with buses by the government through the Ministry at a short ceremony at the forecourt of Parliament House in Accra.

The event was presided over by the Vice President, Alhaji Dr. Mahamadou Bawumia, who represented President Akufo-Addo. In attendance were the Minister of Education, Dr. Matthew Opoku Prempeh, the Director-General of the Ghana Education Service, Prof. Kwasi Opoku Amankwaa, directors of both the Ministry and the GES as well as heads of agencies under the Ministry. 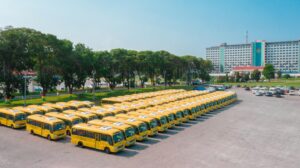 In an address, the Vice President stated that President Akufo-Addo believes that the significant educational reforms that his government has rolled out since 2017 will come to nothing if they do not provide the necessary logistical support for our schools to run effectively as they deliver their mandate for the Ghanaian child. “Our schools have various challenges in the discharge of their administrative functions, and these vehicles, I am sure, will go a long way to help smooth these”, he declared. 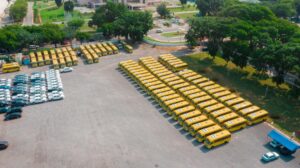 The 100 buses are the first batch of 350 buses that have been procured by government to support senior high schools. It will be recalled that in March 2016, at a ceremony presided over by the Vice President, government donated 365 Isuzu Double Cabin pickup trucks out of a total of 840 procured, which were distributed to all Metropolitan, Municipal and District Directorates of Education, as well as selected agencies under the Ministry of Education.

The Vice President also handed 493 out of a total 2,000 motorbikes that have been procured to aid the work of circuit supervisors and to further enhance their supervisory roles in the education sector.

Victorien Adebayor is a great player, I can’t wait to reunite with him at HB Koge-Former Team Mate

We will continue to invest in the education of our citizens- Dr. Bawumia

We will continue to invest in the education of our citizens- Dr. Bawumia