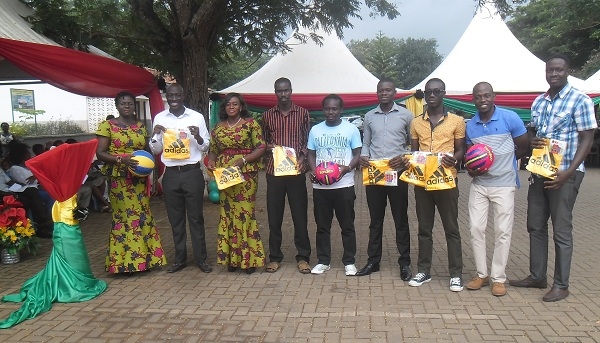 Some former students of University Basic School, Legon (UBSL), have donated an assortment of sports equipment to their ‘alma mater’. They presented this during the school’s Nursery graduation and prefects’ handing-over ceremony for the primary division, held at the school’s premises on Tuesday.
Five year groups comprising the 2000, 2001, 2002, 2003 and 2005 year groups came together to donate sporting equipment, which included brand new soccer training bibs, footballs and basketballs, to the sports department of UBSL.
During the donation, the spokesperson for the year groups, Nana Kwame Osei Fordjour said, “It’s always a privilege to visit our alma mater and get in touch with the teachers who taught us to be disciplined citizens of our great nation, to all the teachers of UBSL, I say “Ayekoo” on behalf of these year groups”. He went on to assure parents whose wards were students of the school that their children were in good hands because majority of the teachers who taught him for close to two decades were the same teachers tutoring their wards.
Mr. Osei Fordjour went on to give the rationale behind the donation. “ Over the past four years, old students have made it point to come together and support the school in our own way, and this year we decided to support the sports department as a way of encouraging students to pursue their dreams in sports whiles studying”.
The Assistant Headmistress of the JHS at UBSL, Mrs. Christiana Armah, received the items on behalf of the school. She commended the old students for their kind gesture and encouraged them to take keen interest in the affairs of the school. “We are happy to see our old students from five different year groups coming together to support the school, the thought of it is so refreshing and we hope they will continue with their benevolent act in subsequent years,” he said.
The donation climaxes the UBS Alumni Games, an annual event that brings together old students of the University Basic School to engage in sporting activities. The event entered its fourth consecutive year this year with the 2005 UBS year group emerging as winners of the competition. Organizers of the event have promised to involve more year groups in 2017.
The event brought together diverse stakeholder groups comprising parents, members of management staff as well as the university community. Aside the graduation ceremony for outgoing nursery students, a new set of prefects in the primary school, were sworn into office by the Headmistress of the primary division, Mrs. Evelyn Lartey.

Use this All-in-One Messenger for WhatsApp, Slack and Skype and chat like a boss

How Mzbel Reacted to the Montie 3 imprisonment

How Mzbel Reacted to the Montie 3 imprisonment