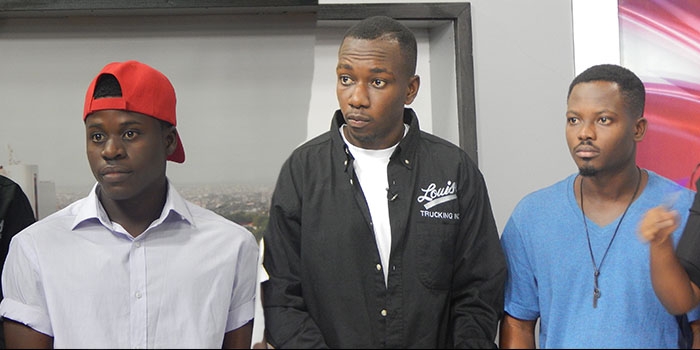 ‘The One’ radio reality show is gradually reaching its climax and the last three contestants gunning for the ultimate prize include Dennis, Kobby and Jeffrey.
The general public gave more votes to the Jeffrey, Dennis and Kobby to propel them into the finals.
Mystee, Rashida and Erica became the unlucky ones as they became the victims of the Triple Eviction.
This leaves Dennis, Kobby and Jeffrey in the competition.
‘The One’ is a realty show focused on grooming a young presenter who is creative, charismatic, ambitious, funny and most importantly passionate for radio.
Jeffrey as part of his final task will host YFM’s Top 20 CountDown TONIGHT from 10PM to 12PM. Dennis will be hosting the same show TOMORROW before Kobby wrap up with the same show on Thursday.
Voting begins on Friday and it’s exclusive to the YFM App.
Patrons can follow the progress of the contestants on YFMGhana.com.
Watch the weekly show on e.TV Ghana on Sundays at 7:30pm.
YFMGhana.com

Mystee, Rashida and Erica Evicted From YFM’s ‘The One’ Reality Show