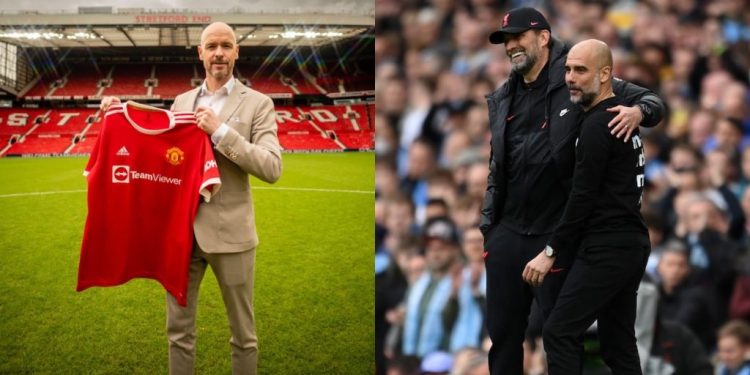 Manchester City will begin their Premier League title defence with a tough trip to West Ham, but the champions have been given the chance to set the pace once again.

The fixtures for the 2022-23 season were announced on Thursday, with Crystal Palace vs. Arsenal kicking off the new season on Friday, Aug. 5, before Fulham host Liverpool and Chelsea travel to Everton the following day.

New Manchester United manager Erik ten Hag begins with a home game against Brighton, while Tottenham entertain Southampton. Nottingham Forest will begin their first top-flight campaign in 23 years away at Newcastle United, and another newly promoted side, AFC Bournemouth, are at home to Aston Villa.

The league will pause for six weeks after Nov. 13 with the 2022 FIFA World Cup due to start in Qatar eight days later. Premier League games will resume again on Boxing Day.

After the opening weekend, the matches are subject to change as broadcasters select televised games, but what can we learn from the initial fixture list?

Pep Guardiola and Jurgen Klopp will want to get off to a good start. PAUL ELLIS/AFP via Getty Images

Manchester City given chance to establish their authority

Man City beat Liverpool by a solitary point to last season’s Premier League title — after a thrilling final-day win over Aston Villa — but there was an 18-point gap between Jurgen Klopp’s side and Chelsea in third place. The top two are clear of the rest but the opening weeks give City a more presentable chance to assert themselves once again.

City’s first game at West Ham will be a test — Pep Guardiola’s men were only able to draw 2-2 at London Stadium last month — but they then face Bournemouth (home), Newcastle (away), Crystal Palace (home), Nottingham Forest (home) and Aston Villa (away) before hosting Spurs, who beat them home and away last season, on Sept. 10.

Liverpool spent most of last season chasing City, and although they almost wore them down, the gap proved too great. Klopp’s side face two newly promoted teams — Fulham and Bournemouth — in their first five matches, but also must travel to two historic rivals — Manchester United and Everton — and visit Arsenal before hosting Manchester City on Oct. 15.

City are such impressive front-runners that Liverpool will be desperate to avoid watching them racing into an early lead. The Reds must stay in contention to maximise the prospect of an easier run-in. However, after facing Tottenham on April 29, Liverpool’s final four games are against Brentford (home), Leicester (away), Aston Villa (home) and Southampton (away).

Last season began with Brentford celebrating their return to English football’s top tier after a 74-year absence with a memorable 2-0 win over Arsenal on a raucous Friday night in west London. Twelve months on, the Gunners are across town to the south to face a Crystal Palace side that thrashed them 3-0 in April, as former Arsenal midfielder Patrick Vieira masterminded a victory that dealt a huge blow to their top-four hopes. The opening game will be an early test of Mikel Arteta’s ability to take the team forward having missed out on Champions League football last season; a COVID-19 outbreak within the squad hampered preparations for that Brentford game but Arsenal will likely have little excuse this time.

There are two intense periods to the Gunners’ schedule that stand out: hosting Tottenham, Liverpool and Manchester City in October; then a daunting run in April awaits with Liverpool and West Ham away, Southampton at home before City away and Chelsea at home.

Man United’s form was so erratic last season that it is not easy to discern a clearly winnable game, but their opening two matches — at home to Brighton and away at Brentford — could have been a lot tougher.

However, new manager Ten Hag then faces a huge test of his credentials and ambition with the visit of Liverpool on Aug. 20. United were thrashed 5-0 in that fixture last season and the game will act as an early examination of the club’s rebuild. It may prove of some comfort that the transfer window remains open for another 11 days afterwards.

Tricky trips to Southampton and Leicester — venues where United lost most recently — precede the visit of Arsenal, whom they narrowly beat last season, before a game at Crystal Palace and a home clash with Leeds takes them up to the September international break. That will give Ten Hag and United pause for thought … which is just as well, because City are up next at Etihad Stadium on Oct. 1.

Antonio Conte has made no secret of his desire to turn Tottenham into Premier League title challengers, but that grand ambition faces an immediate and difficult examination with trips to Chelsea, West Ham and Manchester City in their first seven games.

Spurs won at City last season, but their visit to Chelsea in January was a different story. After their third defeat in 10 days against the Blues — including both legs of their Carabao Cup semifinal — Conte described a “very large gap” between Tottenham and Chelsea. The club have been active in the market already in an attempt to close it, and should that continue, the attention will then shift onto Conte’s ability to produce a team greater than his predecessors, capable of competing with the best.

The first north London derby of the season — at Arsenal — takes place on Oct. 1, while back-to-back fixtures against Manchester United at home and Liverpool away in the space of five days in April will test their durability.

Tyler Perry opens up on 'De-escalating' Will Smith's Oscar drama