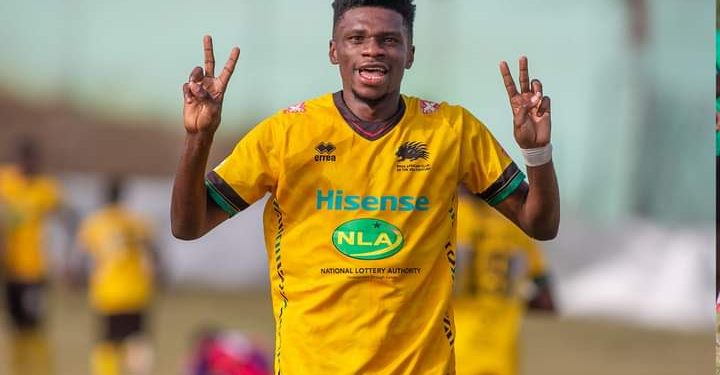 Frank Mbella’s Agent, Amadou Fontem Tigana has disclosed that Udinese Sporting Director will be arriving in Ghana to watch his Frank Etouga Mbella in Asante Kotoko’s game against Accra Lions in the Ghana Premier League.

Mbella has received several offers following his outstanding performance in his debut season with Asante Kotoko according to his agent.
The Cameroonian striker currently leads the goal king chart with 21 goals and is in pole position to win the award.
Tigana told Happy Sports he has received over 5000 calls from agents, clubs interested in signing his client.

“Etouga’s future is like that of Sadio Mane. Because of Etouga I have got like 5000 calls. I have been managing top Cameroonian players like Nicolas Moumi Ngamaleu of Young Boys and he is a national team player.

“I sent him here because I knew he was not going to last more than two years in Ghana”
Amadou Tigana believes Frank Mbella will be the next Sadio Mane for Africa.

He disclosed that he would be bringing in more players to Asante Kotoko as they participate in the CAF Champions League.

The Cameroonian striker can attain legendary status in the Ghana Premier League game on Sunday if he manages to score a goal or two.