Lizzo and Cardi B dropped the video for ‘Rumors’ 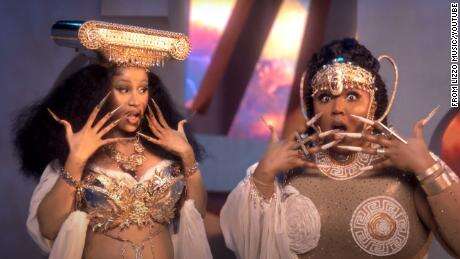 A screengrab from the video of "Rumors."

The Rumors are true — Lizzo and Cardi B have collaborated.

Lizzo dropped the video for her first new single in two years on Friday, which features her and pregnant rap superstar Cardi B.

The stars — dripping in finery — are both center stage in the gold-plated video, which takes its inspiration from ancient Greece.
Three-time Grammy award winner Lizzo teased the collaboration earlier this week, when she posted an Instagram video of herself delivering a wake-up call to Cardi — with the caller ID signaling a collaboration.

The duo had already starred together in the 2019 movie Hustlers. Based on the true story first brought to the world in a 2015 New York Magazine article titled “The Hustlers at Scores,” the film is about a group of strippers who decide to rip off their Wall Street clients

Lizzo first burst into the mainstream the same year, after her song “Truth Hurts” was featured in the Netflix movie “Someone Great.” Her subsequent album, “Cuz I Love You,” was nominated for multiple Grammys and won Best Urban Contemporary Album.