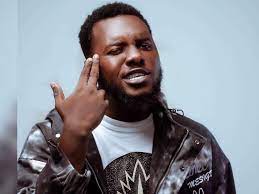 Young talented dancehall artiste, Samuel Ayitey, known as Neff Gee in the entertainment circles has mentioned that his parents did not support him when he started his musical journey.

According to him, his parents supported him in many things but not his music career, because they were not sure whether he would make money from what he wanted to do.

He made this known on Y97.9FM’s ‘Dryve of your Lyfe’ show with Nana Quasi-Wusu (PM).

“When I told my parents that I wanted to do music full time, they told me, they’ve seen me doing music but haven’t seen any improvement in my finances.”

He continued that his father gave him his blessings later on after hearing one of his free styles, but his mother is still not in support of him doing music.

“My dad heard me freestyling one day and said, Kwame, you are good and started supporting me. For my mum, even if I sing for angels to appear on earth, she will still not approve of me doing music.”

Neff Gee is a young and gifted artiste with dope singles to his name. Some of his songs include; ‘Dem Dead’ featuring Fresha Bone and Better Days, ‘Western thing,’ ‘Stop’ featuring Demzi, ‘No way’, ‘Do No’ and ‘Remember.’

It is possible to start a business without money – Entrepreneurship enthusiast

It is possible to start a business without money – Entrepreneurship enthusiast