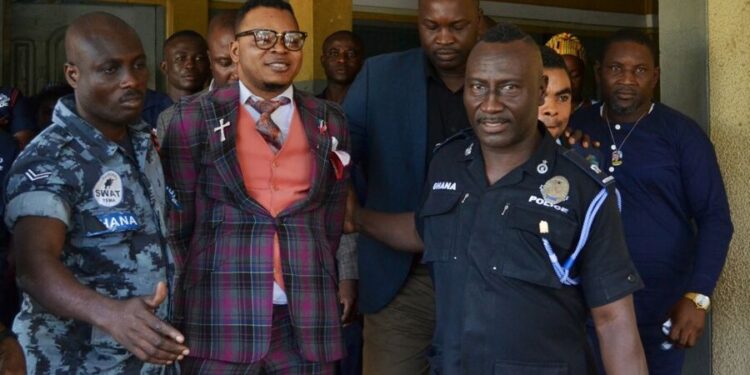 Supporters of the General Overseer of the International Godsway Church (IGWC), Bishop Daniel Obinim have massed at the Nima police station demanding the immediate release of their Pastor.
The Criminal Investigations Department (CID) is holding Bishop Obinim is in its custody for alleged fraud to the tune of GHc 11.6 million.
Yesterday [Tuesday], a video emerged showing the preacher being led into a vehicle from a Police station in handcuffs, escorted by some police officers.
Citi News’ Phillip Nii Lartey is at the Nima he reported that some of the supporters were yelling: “No Bishop no vote”, “No bishop no Ghana” and “We want bishop, we love Angel!” among other cries. Bishop Obinim has since been transferred to the CID department at the Police Headquarters in Accra. The embattled preacher made headlines in the past week for the public flogging of two young adults for which he is under investigation but it is this claim of fraud that has landed him in prison custody.
According to the CID, the complainant came to the Tema Police accusing Bishop Obinim of failing to deliver on a promise of helping him retrieve family gold proceeds from a fetish priest which culminated in him being defrauded of the GHc 11.6 million by the preacher.
Citifmonline.com