by bmensah
in Entertainment, Lifestyle
0 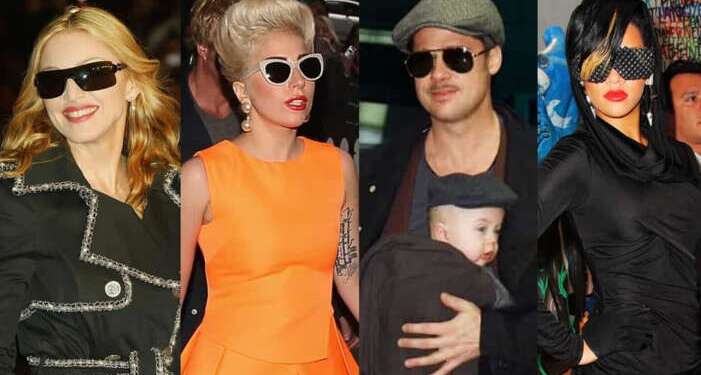 Sunglasses are a timeless accessory. They can make or break an outfit, and they certainly give an air of mystery. Whether it’s because they want go unnoticed, or simply because it’s part of their look, these celebs love their shades so much that they even wear them at night.

Check out this gallery to get some style inspiration from stars who rock sunglasses at night.

Gaga adds a mysterious touch to her outfit with a pair of black sunglasses.

RiRi knows how to pull off a bold original look.

Famous for his star-shaped sunglasses, Elton John always has a pair of shades for every occasion.

The Material Girl wears sunglasses on the red carpet.

Depp complements his hobo chic look with a pair of light blue shades.

The socialite knows a thing or two about fashion, and never leaves home without her accessories.

The singer loves her sunglasses, and so do we.

The Hollywood A-lister wears his shades at a movie premiere in New York City.

The rapper is spotted wearing sunglasses at night.

Diddy wears light shades at night, and looks sharp while doing so.

The rapper scores cool points with his shades.

Anna Wintour can be seen wearing sunglasses at night, so they must be fashionable.

The American actress dazzles on the red carpet with her aviator sunglasses.

The rapper is spotted wearing shades at a film festival.

The British songstress wears a pair of ’80s-inspired shades.

The actress wears her blue shades to an event.

Pitbull looks sharp in his suit and sunglasses.

When he’s not covered in makeup, the rocker can be seen wearing his shades.

The skater girl is spotted in London wearing, you guessed it, sunglasses at night.

Tom Cruise wears his sunglasses while signing autographs. Behind him and also in sunglasses, but looking less than impressed, is his then-wife Katie Holmes.