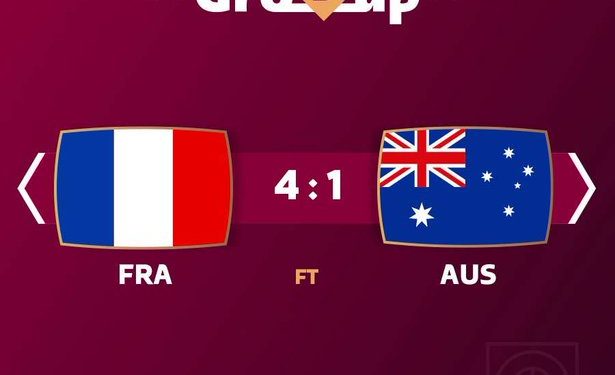 France went into the game without one of their in-form players and crucial forward, Karim Benzema, however, despite their loss they made turned their misfortunes into light with an exhilarating attacking performance.

After nine minutes, Craig Goodwin gave the Socceroos a startling lead with a far-post goal, but they soon fell victim to France’s firepower, which was led by veteran Giroud and Kylian Mbappe.

After 27 minutes, France equalised courtesy a header from Adrien Rabiot, and five minutes later, Mbappe’s incredible backheel set up Giroud, who was filling in for the injured Benzema who won the Ballon d’Or.

After heading in Ousmane Dembele’s cross after 68 minutes to score his first World Cup goal, Mbappe turned provider three minutes later. Mbappe was a threat to the Australian side the entire game as he created problems in their defensive area to resolve.

Giroud equaled Henry’s record of 51 goals for France with a leaching cross from Mbappe as he converted the ball into post with a thumbing header.

My views on the personal branding conundrum

My views on the personal branding conundrum