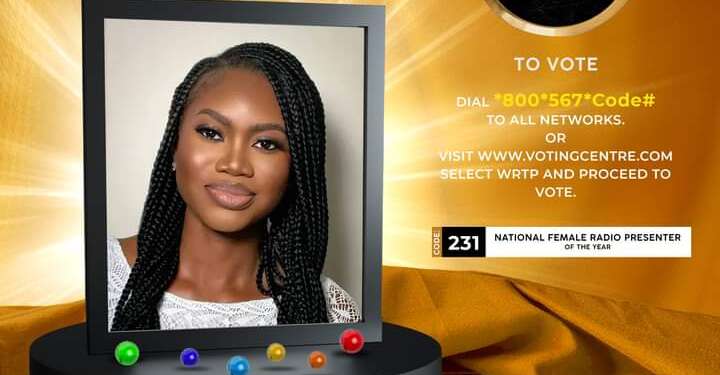 0
SHARES
49
VIEWS
Share on FacebookShare on TwitterShare on Whatsapp

The 2 categories she has been nominated are , National Female Radio Presenter of the year and Morning Show Host of the Year. In these categories, she will be battling with some of the leading household names in the industry.

Over the years she has proven that she has the knowledge and flair of communicating effectively to her listeners to help transform their lives on the most listened urban station in Takoradi, Y97.9

It is of no doubt that Chelsey Sey as she is affectionately called, has the successful skills of doing what she does best , handling and engaging her listeners on Ryse and Syne show which airs on YFM Takoradi each and every weekend from 6am -9am.

In 2020 Chelsey Sey won the best Radio Personality of the year at the RTP Awards .

Reacting to the nominations, she expressed her profound gratitude and how ecstatic she was to be honored in this way. She also appreciated the support her listeners and the recognition that the award board, Ex-one Entertainment had given to her work.

“I am absolutely excited to be nominated in these categories. I want to truly thank my awesome listeners, and the whole YFM team for believing in me and my abilities. I am also grateful to the organizers, Ex-one Entertainment for such a great initiative.

Programs Manager for of YFM Takoradi , Agyekum Gyimah , expressed how proud he was with the nominations received by the award winning presenter . “Chelsey Sey has showed what hard work and dedication really looks like. The whole YFM team is rooting for her, we believe she will make us proud as she always does”.

Western Radio and Television Personality Awards (WRTP Awards 2021) is being organized to reward and appreciate the hard work, dedication, and contributions of media personalities in the Western Region towards the media growth in the year under review.

Winners of WRTP Awards 2021 contest will be given brand new laptops in addition to the plaques to help them in their researches and line of duty.